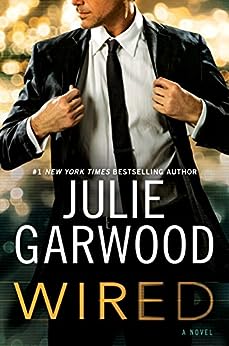 Liam Scott, an FBI agent, was working on a case that was going pretty well until someone leaked information about the case that could jeopardize the case as well as the agent’s credibility. The FBI cyber task force can’t find the person responsible for the leak so he needs the best damn hacker to do it.

Allison Trent broke the law a few times but just with the purpose of helping others. So working for the FBI or any other government agency is not something on her wish list, but the excitement to do something that everyone thinks she’s incapable of is enough of a motive to sign a contract to work for the FBI cyber unit.

This was my first book by Julie Garwood and I liked it. The storyline is quite good and a lot different when compared to the majority of the romances nowadays. But, something was certainly off.

Allison’s life is not an easy one. She and her sister lived with her aunt and uncle after their parents died. The problem was that their aunt and uncle hated them both and only cared about their son Will, who spent most of the time finding ways to end up in prison. And guess who had to work as a model to pay the lawyer’s bills? Allison, that’s who. And that’s where Liam took a giant importance in her life. He gave her the feeling of protection and affection that she wasn’t used to.  Allison was a good character: she’s not the strongest woman you will meet because she’s constantly doing what her relatives ask of her. However, she’s pretty confident in her capabilities.

Liam is not news. Bad boy that looks like a god when wearing a suit. Almost everything he does is confidential so we barely know him to be honest. We know he likes women but not to have a serious relationship seeing as he’s traveling for work most of the time. We don’t know his family and we only know his friends because they’re also his partners.

Regarding the characters, there was a lot of things that I think were unnecessary. There’s a lot of rambling about characters that aren’t that relevant to the book while important characters like Liam are barely developed. He spent most of the book away at work, spending weeks and weeks without saying a word to Allison and we know nothing about him.

Which leads to the fact that they spent a lot of time apart. They have sex but they don’t talk about it and pretend it didn’t happen and then out of nowhere he goes away on work without a goodbye.

My expectations for this book were really high and that’s probably why I’m so disappointed and maybe the book is not really as bad as I’m picturing it, so you should probably read it anyways!