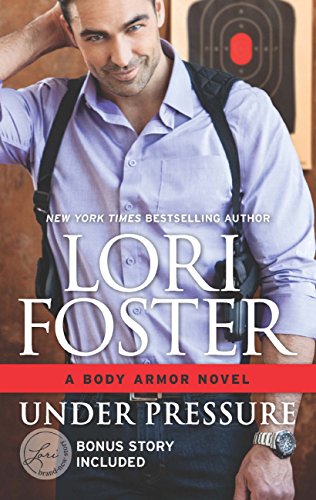 Meet Body Armor, an elite security agency with a selection of the best bodyguards in the states, from the most focused one to the hottest.

Leese is one of the hot ones. Although, he´s pretty focused too. He’s an ex MMA (Mixed Martial Arts) fighter with a lot more to give than just a few punches. His new assignment is to protect a woman, Catalina Nicholson, from any kind of danger and that was supposed to be an easy task but Catalina is not exactly the calmest person and she has real danger after her.

“My job is taking care of you.”

I’m falling in love with Lori Foster’s work real fast. The suspense amongst the romance is something I enjoy and Foster does it just the way I like it: light, funny and hot.

Regarding Leese, you already know the drill: he’s too good to look at and the way he walks is enough to make you fall in love. Better yet, he’s not the kind of man who’s afraid of relationships. But what I really loved about him was his caring and loving side. Lesse is like a big, ripped yet fluffy bear. So how could you not fall in love?

Cat, on the other side, can’t really be measured based on her size. She’s petite and not the strongest woman but her personality sure is more than enough to repair that. She’s snarky, completely independent and really big on honesty. Like, I-want-to-have-sex-with-you kind of honest. She says everything that comes to her mind without thinking and that was pretty funny since she was so straightforward about her intentions regarding Leese.

“She wanted him. And that worried her.”

The storyline is really engaging and not so predictably as you might be thinking. As I said, she’s pretty straightforward about her intentions, and Leese is the one who tries to change her mind, not because he doesn’t want her, but because he thinks she just sees him as her safe place. But then so many hours together are bound to lead them to bed, which was, sooo worth the wait! There’re some twists that made my heart rate speed up and the romance is enough to make your cheeks burn. I also really loved the involvement of other characters that will be the main characters of the next books.

“ He wasn’t entirely sure which he’d prefer. Getting sexually involved with a client would bring its own complications.

But not having her… he didn’t want to think about that yet, even though he knew it’d be best.”

You don’t need to read the books in order nor to read any of them to read one but I will be reading the entire series (including the fourth book), so stay tuned!