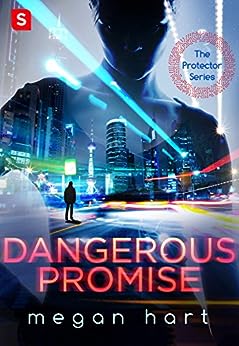 Nina Bronson used to be a soldier of the United States Army until she ended up in a hospital bed dead for a whole eight minutes. But an internal technology saved her and brought her back to life just not exactly as she used to be: now she’s faster, stronger and potentially dangerous if she’s in the mood for it. But that technology, like any technology, needs updates and she’s not getting them thanks to a man she’s now supposed to protect.

As a private bodyguard, she can’t leave his side at any time so you can already guess the only way how that is going to end.

This is a little different from what I’m used to because there’s some science fiction involved! However, she’s more human than anything else so that didn’t bother me that much.

This book could easily be classified as the rich falls in love with the average. They’re from completely different words who can’t quite understand each other’s lives. And I quite liked it. The story is obviously packed with action since Ewan has a lot of people who would like to see him dead because of the tech he created himself and is now being used on Nina.

Regarding the romance part, I really enjoyed myself! They’re cute together and I’m really happy about that because I was not expecting it since she’s a soldier. They spend some beautiful time alone in a cabin in the middle of nowhere which made me jealous honestly.  Though, I have to say, she’s the dominant one in bed most of the time, so if that is not your thing, be aware of that! They’re not kinky or anything close to that but I got the feeling that she was the dominant one, even though Ewan was never too far behind.

I think the author measured it up really well:  the action and the romance. And I think she did both parts well. The only reason why I’m not giving five stars is just that the book didn’t touch me. Anyhow if you love some good science fiction you should really try this book and the next ones of the series because they might touch you!