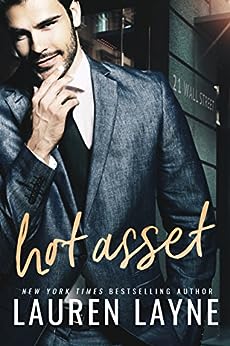 Lara Mckenzie is an SEC (Securities and Exchange Commission) investigator working towards her dream of being an FBI agent. But, in order to fulfill her dreams, she needs to take down one of the Wall Street’s biggest investment brokers: Ian Bradley.

But Ian is not just the smug wolf of Wall Street that everyone knows. He came from nothing and worked hard to get to where he’s now, so he’s not about to let Lara take it all away from him. He knows he’s innocent so now he only needs to convince her of that. But how?

Good ol’ sexy contemporary romance! That’s what this is! A good story, an I-have-it-all hero and a shy-yet-fierce heroine working through their forbidden chemistry! It is also a pretty good intro to the series and their characters (lots of Ian’s friends).

At first, Ian was too cocky, k? He started from nothing and got it all later thanks to his hard work. So he’s proud of it, as he should be. But he’s also proud of the number of women he has under his belt and the fact that he doesn’t sleep with the same woman twice because he just doesn’t need to. So, cocky much, right?

But that side of Ian doesn’t last long because, for the first time ever, he’s dealing with a woman who won’t fall for his pick up lines. So he doesn’t have any other option besides letting his guard down, showing us a caring and loving man instead of the overconfident Ian of the first few chapters.

“Like colors are just a little less bright when he’s not around.”

As I already said, Lara is the shy type. She’s pretty invested in her work to get her dream job, so she knows she can’t get involved with Ian while she’s investigating him. So they both try to be professional (between you and me, I would rate their effort a three out of five, if you know what I mean [insert smirking face emoji]!).

Regarding the writing style, the story is pretty fast-paced. I read this book in two days because you just can’t stop reading! First, you’re itching for them to get together and then you’re dying to know how the case will end. So when you catch up with yourself, it’s already the end and you’re all happy and warm inside thanks to their happy ending!

So, who absolutely loved this book? Me, mys(h)elf and I!