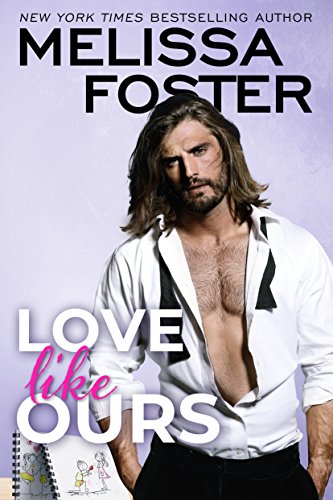 Bartender slash dancer Derek has one big goal in his life and that is to keep his father who’s an Alzheimer’s victim alive and happy for as long as he can. Besides that, he also has his job and college, which doesn’t leave him with a lot of time for other things, like relationships.

Melissa Foster is just one of those authors whose books’ descriptions  I don’t need to read to know if I’m going to like it. Because I already know I’m going to love it!

“You can trust me to be careful with your heart.”

What can I say about this book? Nothing bad, that’s for sure.

After their first encounter, Derek starts taking Talia’s classes (even though he’s not even her student) so he can watch her and have something to talk with her about. And just like that, he’s the most fun that Talia has seen in a long time. They start off by doing small things together until they both acknowledge their connection.

From that on you already know the drill…

“And I’m totally, utterly, devastatingly in love with loving you.”

There’s no age gap or something between them

So, regarding the characters, I’m happy! Talia is a pretty relatable one with really nothing out of the ordinary. Now, when it comes to Derek I have to say that his character is an original one! For once, we have a hero that is not unhappy or over-confident, which already big news! Then, I think there’s a fine line between an irresponsible person and a relaxed one, and I think Melissa did a brilliant job with the hero! I mean, his father is suffering from Alzheimer so he’s perfectly aware of his responsibilities. However, he’s still cool about his life and is trying to make Talia happy at the same time (and he is so good at it!).

On a side note, I have to alert you, ladies, that this book has some sex scenes. I mean, not that it is the main part of the book or even less, all the book it’s about, but it’s still something that happens a lot. They’re not descriptive or aggressive, so it’s okay.

Oh, and even though at first they’re kind of teacher and student, there’s no age gap between them; they’re practically the same age.  Derek is just taking his master late in his life.

Also, the cover of the book! Brilliant! The man in the cover is exactly like Melissa describes Derek!

I absolutely loved how Melissa tackled Alzheimer, so peacefully and beautifully, without forgetting how a good ol’ contemporary romance is done.  This is not overly emotional or sad. I mean, I didn’t cry so that must mean something! Overall this is an amazing read for those who enjoy a love story with more than just the love bits. Highly recommend it!

Connect with the author:
Melissa Foster