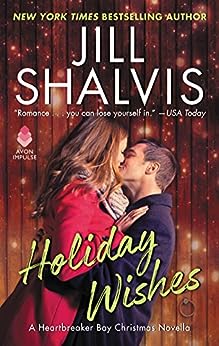 Sean and Lotti had their chance in the past and it didn’t work out. He went away to study with the promise that they would still keep in touch. But that never happened. Ten years have passed and they never talked to each other again since their first and only night. Until he’s at her B&B with his friends and family, asking for a second chance.

As you can imagine there’s no plot twist or any kind of surprises in this book since is such a short story happening in less than 72 hours.

However, there’s great character development when you compare the characters from 10 years ago (when they had their first chance) with the nowadays characters. They changed their points of view, especially Sean when it comes to relationships and feelings.  He basically grew up a lot and turned himself into a real man wich made them switch roles. Ten years ago she was in love and he was confused; now she’s only looking forward to getting laid whilst he’s very much interested in a relationship with her.

“I want a chance to right my wrongs with you, Lotti. All of them.”

However, even though this is not a complex story, it still is cute and sexy enough. With one very intimate swooning sex scene.

Highly recommend it to any fans of the author or for anyone looking for a cute short story.